This past weekend Huddersfield parkrun was cancelled because the Huddersfield Caribbean carnival was on. So I had to get my parkrun fix elsewhere, and that's how it feels, a fix in a good way. I'm only 6 runs in but the whole routine of getting up and going for a run within the fun and friendly atmosphere of parkrun plus having the rest if the day still is just great. So after debating between Bradford parkrun or Dewsbury parkrun I went with Barnsley at Locke park. Mainly because its our 2nd closest, I had no idea what it was like or what it's average numbers were. So I looked online to find its average attendance and directions to the park so I was all clued up ready for Saturday morning.

On the day the plan was for me to run the 3 laps of the park whilst Sarah-Jane walked round with Dexter and Clark in his buggy for the first time in about a year. Then when I had finished I would catch them up and run with Dexter until he finished his 3 laps. On arriving at the start finish line that plan was scrapped as there is, in Dexters eyes and a little in mine, a great playground. So Dexter decide I could go on my own and he would play in the playground and cheer me on.

There was a small but close group of runners at Barnsley parkrun, I say small but there was just under 100 and after a few 50 & 100 club presentations we gathered at the start. As I was unfamiliar to the group I had no judgement on where to start from for my average time, unlike at Huddersfield where I knew roughly to start with and exactly with the new penning system. So I placed myself about 2/3 back and when a guy next to me started talking about getting a DNF result today I knew I was in the wrong place but never mind. We were off and after a little shuffling and a slow start I was off at my fast pace. I wanted to keep track of people on the first lap as I had no idea where I had to go, but soon realised that the route had small arrows stencilled on the floor for you to follow. I still kept in touch with the people in front of me but I had no idea what pace I was on as I couldn't hear my Endomondo app. I really tried to keep my pace up and for the first 2 laps I did I even over took a few people. On the second lap I came upon a lady who was encouraging a chap trying to keep him going and for a while it was working but he eventually drop back but she kept going. She start helping the next person she came up to telling them to dig deep and keep it up, and this time it fell on deaf ears. Just at the start of the uphill on the 3 lap I came up behind her and she heard me and saw me coming so start cheering me on and then said something that at the time didn't register. But every time I think about it now or when telling people about my latest parkrun makes me giggle like a school boy. She heard me coming up behind her so to encourage me she said come on you can do me on the hills. Which I did but I did have to dig deep to get to the top of the hills. The uphills at Barnsley are deceptively tough but the long downhill to the finish is a welcomed sight once you've reached the summit. I reached the finish in a pleasing 25.24 and because of the heat and the unfamiliar route I was happy. Locke park was a lovely little park and would definitely do Barnsley parkrun again. 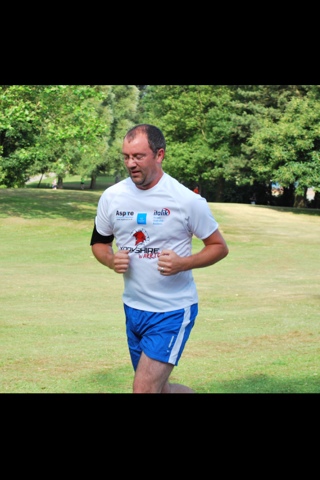 From parkrun it was home for a shower then some lunch and then my mums, for the Huddersfield Carribean carnival. This is an annual event held in the park where Huddersfield parkrun is held and attracts thousands of people to see the parade and enjoy the festivities in the park. There is dancing, fairground rides and stalls selling whistles, food and drink.

With the weather being as nice as it is the carnival was busier than usual and the park was crammed, there must have been about 15000 people if not more. We left Sarah-Jane and Clark at my mums with Nana (Janice) whilst the rest of us went across to the park and the boys (Dexter and Liam) went on some of the rides. 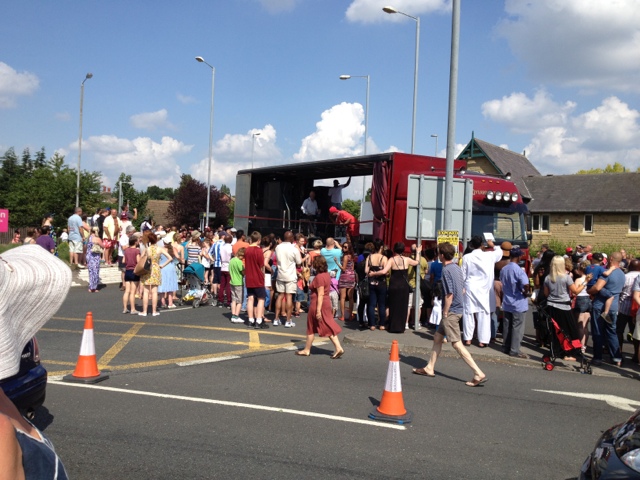 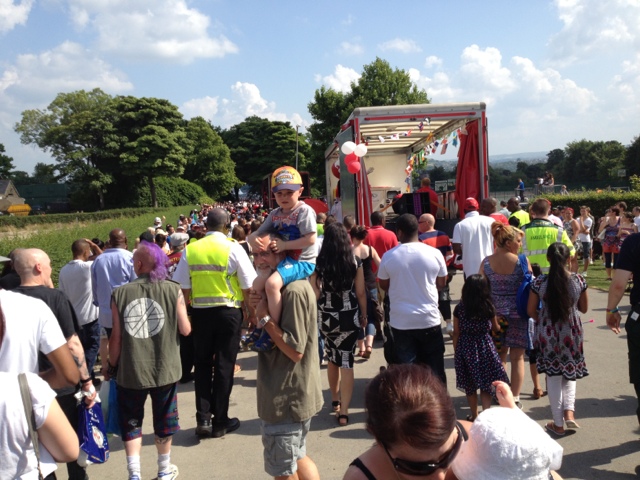 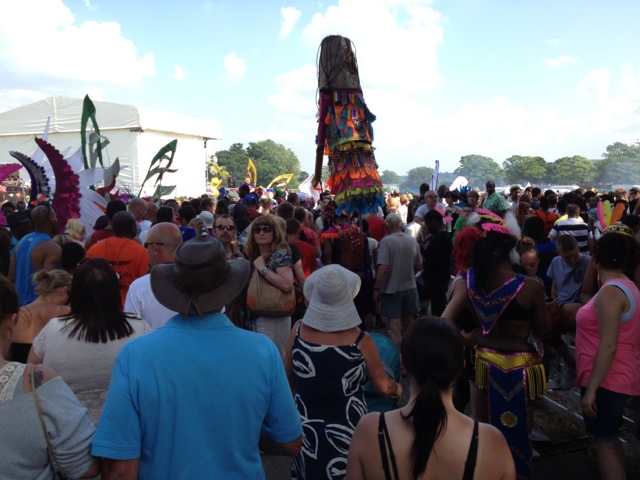 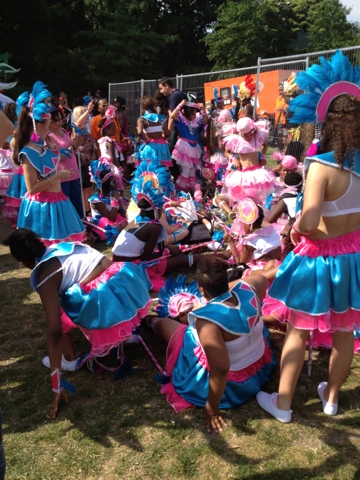 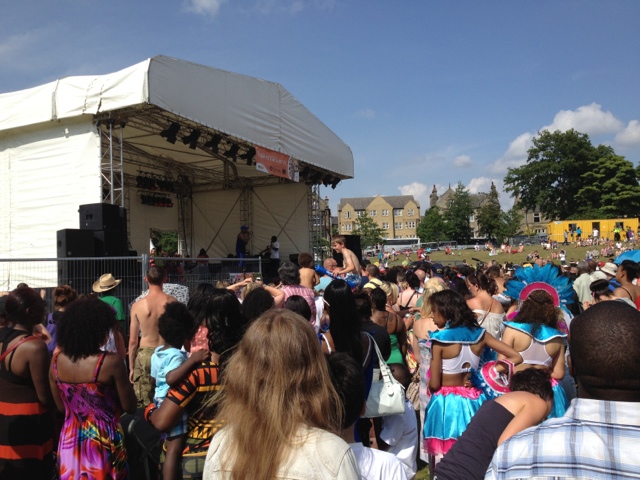 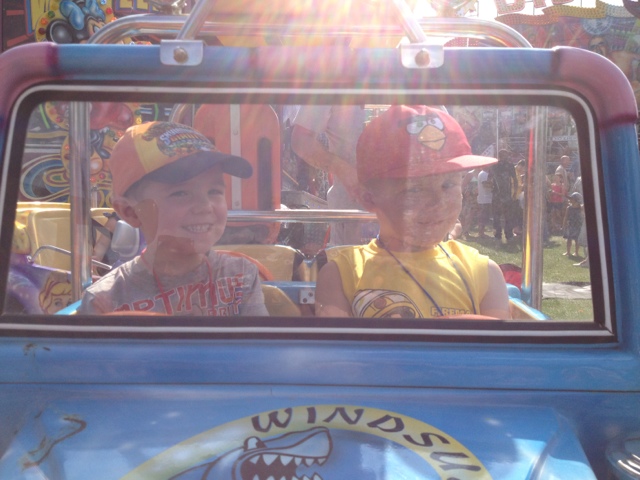 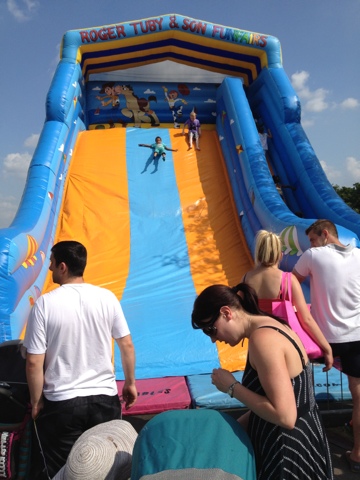 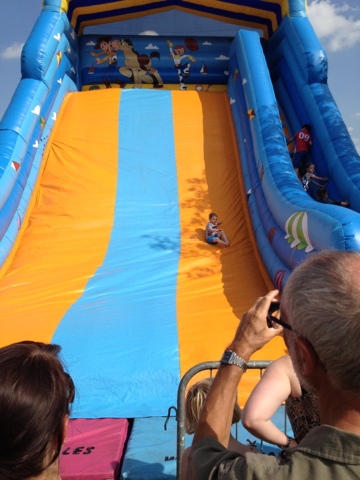 They had a great time and by the time we got back to my mums we had to quickly grab some food then we had to get home so Sarah-Jane could get ready to go out to a work friends retirement party. After she had gone I got the boys settled down watching DVD's in their room, after a busy day I knew it wouldn't be long before they were asleep. They managed to keep going until 7.30pm then I found them like this. 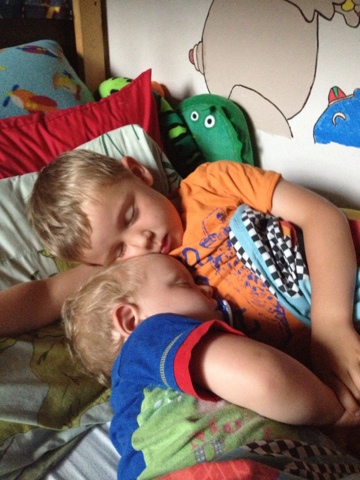 On Tuesday I started a new (to me at least) fitness workout called Insanity. I never thought I would follow a fitness workout DVD but I also never thought I would run regularly either. So far I think I've lost about 4 pounds in sweat in just 2 sessions and gained sore legs but I feel great so far just another 58 days to go. I'll keep you up to date on my new fitness scheme as I go.

This past Sunday was my 1st Runniversary, so this weekend was full of activities just to emphasis the difference a year makes. Saturday morning was Parkrun then it was off to my mums to finish off the decking I had made her. Then Sunday morning consisted of a bike ride with Dexter and a visit to the playground, then an afternoon of gardening. Followed by my Runniversary run following the route of my first run a year ago.

Saturday morning we all set off for Parkrun Huddersfield and Dexter was determined to run further and faster, or at least that was what he had been saying all week. We arrived at Greenhead park a little later this week so there was already a bunch of people lined up at the start. Dexter and I quickly did our stretches and Mummy and Clark went off to the playground and their first vantage point to cheers us on. Parkrun were using a new penning system at the start so the faster runners were at the front and the slower ones were at the back. It worked well and we all got started without too much jostling about avoiding slower runners. We managed to get to 1km before Dexter started to whinge about needing to slow down. As I know him and what he did last week I know he was just winging because he's 5 and nothing else. I kept him going until 3km then I said he could have a little walk and a rest before we would start running again. He was really good and started running again and then at 4km we had another walking rest for about 100 metres. I knew he had lots of energy still but I didn't want to push him to far that he wouldn't get out off doing it again. The main reason I knew he had lots of energy still was whenever we went past some Marshals who are brilliant and are always cheering you on, he would grin from ear to ear and speed up a bit. As we got close to the cafe and the area all the finishers gather in the buzz seemed to help Dexter and a few people started to shout his name to encourage him. It helped and we rounded the final corner with the finish line in sight, and a lady we passed also cheered Dexter on and I told him to sprint across the line which he did and got a great cheer too. He has finished his 2nd Parkrun in 35.33 which is  4.30mins quicker than last week, he did brilliantly. 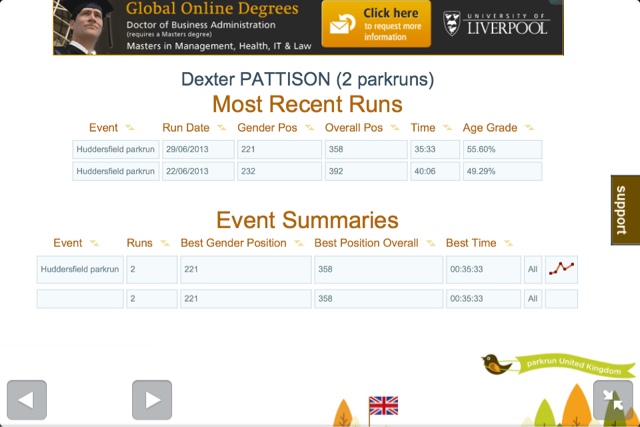 On Sunday Sarah-Jane took Clark into town to do a little shopping so Dexter asked if we could go for a bike ride. Now when he said this he meant I would be on my bike and he would be towed around in the bike carriage we have. So we did and we rode up to the playground near his school and whenever I ride my bike I always forget that you use a different set of muscles compared with running because when we got there I was surprisingly tired for such a short distance. Dexter had a great time and 1 of his friends from school also came up to play in the playground, and it was funny listening to them and the way they play together. When there at school you don't get to see/hear them play with their friends so it was interesting seeing them interact. 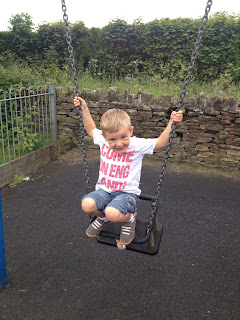 As it was my Runniversary Sarah-Jane and I unintentionally recreated my first run from this time last year. The plan was to run around the block exactly the same as I did last year to see the difference a year of running has made. The unplanned debacle that followed was exactly what happen last year too. I kept saying I was going for a run but things kept distracting me, like gardening, some housework and playing with the boys. 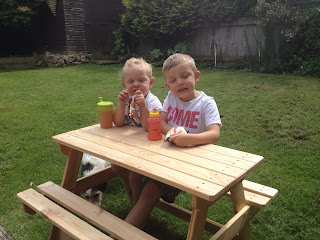 It wasn't until Sarah-Jane said 'right stop it and just go for a run' that I actually did. That's how it was last year too and if it wasn't for that push from her last year I don't know if I would be blogging about my running and all the stuff that has happened in the last year. Now last year I did the 1km run around the block in 6.07mins which as a time isn't too bad I've done 6 min km's since then. It was the end of the run and the aftermath that was key, I didn't even manage to run the full 1km just I stopped at 0.98km and the run completely took it out of me and I was still recovering a couple of hours later. This year I decided to see how fast I could do it now and how long it would take me to recover. Well I completed the 1km in 4.05min which was 2 mins quicker and after about 5mins at home I was fine again. It was a great feeling but I still have a way to go before I could keep that pace up for 5km or 10km which I would love to be able to do. I can keep a 5min to 4.30min pace going comfortably now, so lets see how I'm getting on this time next year. 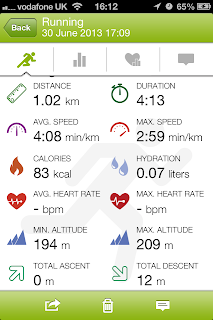 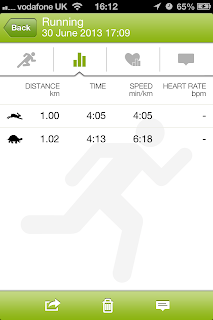 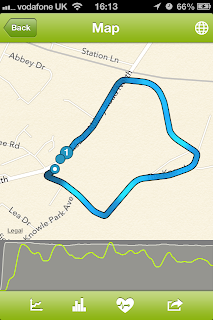 As you do on anniversaries you tend to look back at the last year and reflect, and that's exactly what I did this weekend. If you had told me last year that I would be running at least 10k a week I would have said 'yeah whatever'! The thing is its gone way past just that, and that's what more surprising. I've taken part in 5 organised 5k runs, 2 10k runs, and a 10 mile muddy run. If that wasn't enough I've even organised a 10k run which raised £1400 for my sons school and I'm in the process of organising another 10k run to raise money for the local Church. I find myself looking at places differently now too, I catch myself planning runs in my head when I see places that would be good 5k or 10k routes. 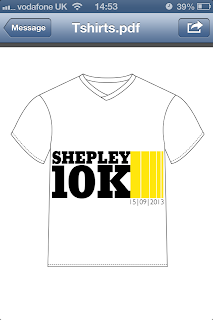 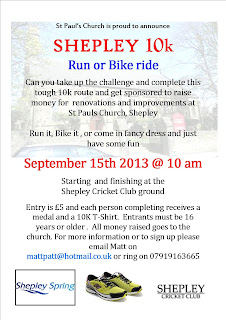