Organising and Running the Shepley 10k

Not 2 months after the Shepley first school fun run I now find myself at the controls of another fun run. The Shepley 10k is born and to my surprise it has gone smoothly, routes are sorted forms and sponsors organised and authorities informed. They only thing is the date it seems to be the only day I could have chosen where a lot of our runners from the Shepley First School fun run can't run. For various reasons they can't run on July 6th so I know have to try and spread the word to new runners and try and do this very quickly as its only 7 weeks until the Shepley 10k. So the past few days I've been emailing or social networking my bottom off trying to get the word out there. I've emailed running clubs but apparently there is an established run the day after. And tonight I've been to the Shepley village association meeting to drop some flyers off. 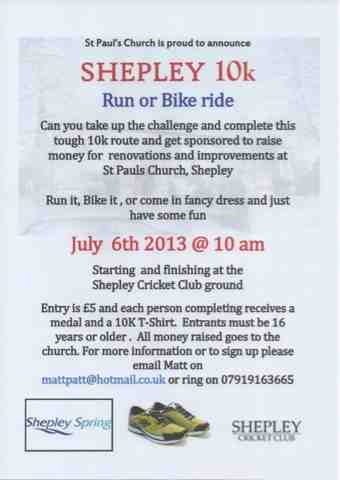 I could stay for the whole meeting as Clark is still not 100% after his chicken pox and was being a very grumpy boy. So I dropped things off with Rachael to hand out and I returned home to help Sarah-Jane with the boys and bed times.
I have also been for a couple runs on the route to refresh my brain on where signs and Marshals will go. I ran a variation of the route which ended up being 8km but still a good run. Before I set off I picked up a few flyers and put them in my back pocket in my shorts, as I tend to see other runners as I go and it would be another way to spread the word on the Shepley 10k. I was only 1km in to my run when I saw a guy running towards me on the other side of the road, so I crossed over and like a crazy person thrusted a flyer in his face and mumbled SHEPLEY 10K. I did this whilst still running but I did get a quick reply of 'oh ok' and we carried on our routes. After about 3.5k I saw another guy but by the time I could get a flyer out he was gone, our routes crossed briefly he was trail running along public footpaths and me on my roads. He was flying at quite a pace almost like someone was chasing him. After that it was all uphill and I was so focused on my breathing and keeping my knee going and not hurting I think a bull could have ballet danced passed me and I wouldn't have noticed. By the time I reach the top of the hills I was at 6km and I was pretty pleased with myself as I had kept a good pace up the hills. As I reached Penistone rd and the crossroads pub I could see at the top of the hill another runner, and I thought to myself 'can I catch him?' I picked up my pace a bit to see if I could close the 200m gap. By the time he reached the top of Marsh Lane I had closed the gap by about 50m but I knew I had to up my speed a bit more in case he turned off on to a road I wasn't going on myself. As the gap was now 100m I started to realise how tired I was getting at this pace, plus it occurred to me that the flyers in my pocket could be getting a bit sweaty. So as the gap shortened to 50m I took a flyer out of my pocket and held it out blowing in the wind to dry it off  in case it was a bit sweaty, whilst still keeping up the pace. As I caught up to him I saw he had earphones in like me so I said to him CAN I GIVE YOU THIS, WHAT IS IT? SHEPLEY 10K! OH, WHEN IS IT? JULY 6TH, WHAT? JULY 6TH! MIGHT FIT IN! HOPE SO! I now had to keep at my fast pace to make it look like that was my natural pace and not the pace I used to catch up with him like a stalker. I wasn't until I was about 100m past him that I slowed a bit, as I felt I was a significant distance from him that he wouldn't notice. Luckily I had to cross the road too so I looked for traffic slowed down and carried on at my usual pace until I reached 8km and neared home. I walked the last 100m home and it was only then that I felt benefits of my added pace, I felt strangely stronger and happier and like I had given myself a proper workout. 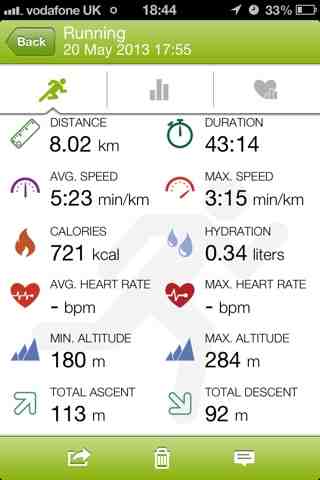 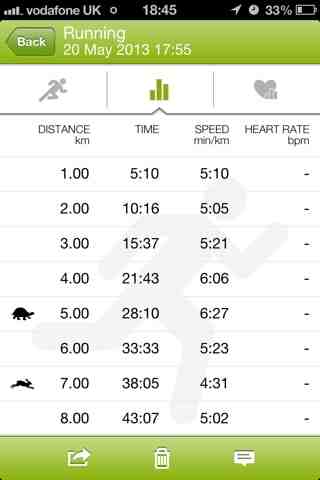 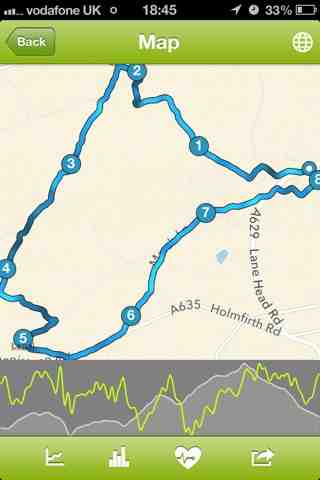 I hope that the Shepley 10k takes off because the route is a very good run and I think it will lead to a lot more things, for me and for Shepley.
Keep running everyone.
Posted by Unknown at 05:37 No comments:

For the past couple of weeks we (Sarah-Jane and I) have been mainly focused on baby names after discovering that we are having another boy. 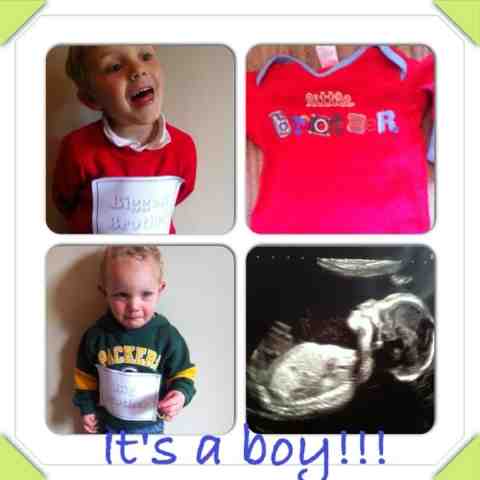 I think we have come to the decision that boy number 3 will be called Flynn Richard ______ Pattison. The 2nd middle name is still under discussion and we are back and forth over 2 names, Bishop and Darwin.
Also I've been busy turning the cogs in my rusty brain trying to find a job and plan my next event. The job front isn't going to well but the organisational skills I gain from organising these fun runs should hopefully help.
The St Paul's church in Shepley is in need of money to match a grant they have been given to refurbish their facilities and if they don't raise the money they lose the grant. So I offered to set up a fun run for them to help raise some of the money they need. And so I was straight onto the contacts I gained from doing the Shepley First School Fun Run, and was planning routes out in my head. I came up with a couple, a short one around 6k and a longer 10k one too but I wasn't sure which was best so over the next few days I ran them both. They both followed a similar route but the 10k took a few extra roads in along the way. After completing them both I decided to go with the 10k mainly because it was more of a challenge but I felt a bigger sense of accomplishment after finishing. I still have to sort a few things out with the Shepley cricket club and set a date and time but as far as permission goes the SHEPLEY 10K is born. 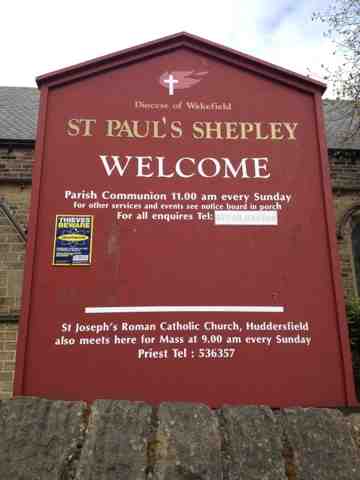 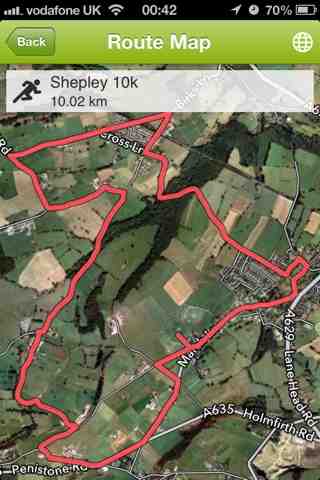 The route has slightly changed from this picture. You get a great sense of scale from it and every time I look at it I can't believe its only 10k it looks huge. I'm very excited about this run and with it being a possible July date should be a very nice day for everyone who will be involved. As the church host a lot of community clubs I.e dance classes, guides etc. I'm very optimistic that we should be able to get the word out quickly and to a wider audience than we did for the school plus I hope we will get a few more volunteers for Marshals too.
As always I will keep you informed as to my progress and my runs, and keep running everyone. 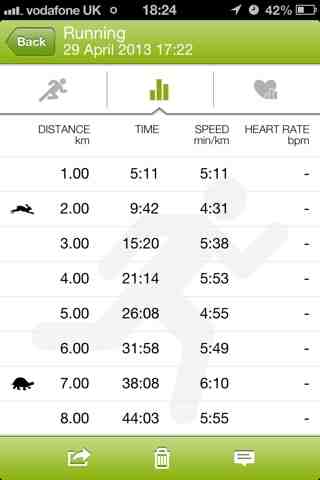 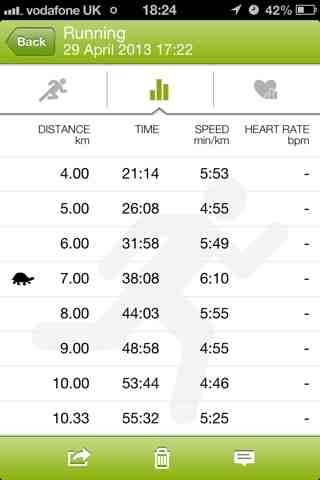 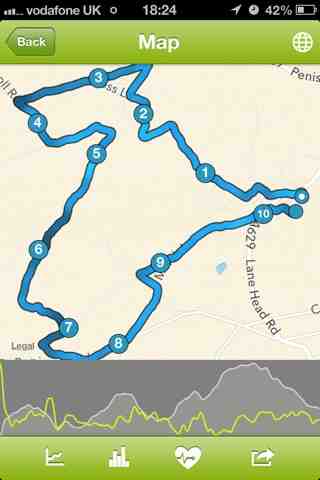