The Shepley 10k returned again a couple of Sunday's ago, (Sept 13th) for its 3rd year and again we had an amazing day and turnout.

This year we were again graciously hosted by the Cricket Club and they were once again having their family fun day with stalls and games to play, along with a BBQ and some music. The local Beaver scout group also had some activities going on as well as crafts and glitter tattoos, the kids really enjoy it. The cricket club hosted the kids fun run again this year and were amazed by the turnout, so much so that they introduced age categories..

On the morning of the race I was up early to send the boys and SJ off to Huddersfield junior parkrun whilst I went to set up the course with Km markers, arrows and other signage. The weather was glorious and a complete change from the day before where it decided to rain pretty much all day, there was now barely a cloud in the sky and no hint of wind which is unusual for Shepley. I finished off the course and ended up back at the Cricket Club to make sure things at the start were in order. I organised the back of my car so I could use it as a registration base made sure I had all the goody bags, t-shirts and water. I had everything but a course map and as people started to arrive it was clear I really needed one, luckily SJ had arrived which gave me the opportunity to pop home and print one off and as I returned things were starting to build up nicely. My volunteers were arriving and quite a few on the day entrants had also turned up easing my nerves about breaking even on the costs.

As the start time was approaching I was getting more excited, more excited than last year and most other events I'd been to. I wonder if this will happen every year, whether it will get more exciting each year or not, I hope so. Next year there is the possibility of the Shepley 10k being on the Stadium runners championship calendar which would mean more runners, more excitement and more money for the Cricket Club. I don't want to think too far ahead but the Shepley 10k could be a really good event and I can't wait to see how it develops.

We all gathered at the start line and I gave a brief safety announcement and then left the countdown to SJ, 3,2,1 and we were off, I still didn't know at what pace I was going to run, fast, slow to watch people go by or with Jessie. Like last year it wasn't until I hit the road outside the club that I made up my mind, and as last year and pretty much most races I went for it, I enjoy going fast just too much. I headed down Marsh lane towards the co-op and made a left on to station road and then again on to Jos lane where I made up a few places on the long flat section of the course. The race director in me was still worrying whether the people in front of me were going the right way but as I went past marshals they reassured my fears as they all seemed happy that every was going the right way. This meant that I could just enjoy the race, the hills and the picturesque scenery on this glorious day.

The hills as big as they are flew by and I was soon up at Snowgate and heading out towards the main road and the final small climb before the long fast finish down Marsh Ln back to the Cricket Club and the finish. I crossed the line in 6th place knocking 8 seconds of my PB which is awesome considering some of the times that people managed on the day. There was some amazing times across the board and even our last place finisher did the route in a brilliant time considering the hills and his return from a slight injury. 1st place was taken in a new record time of 36m10s knocking 4 minutes of last years record, he ran round the course that fast that our announcer missed him crossing the line. Well done Tom and I hope you return next year to defend your title.... 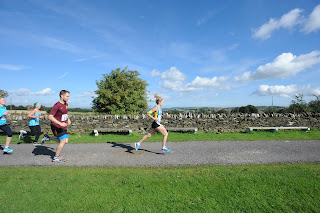 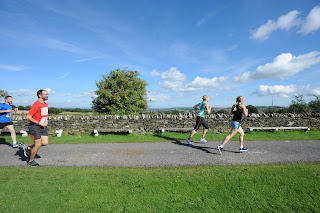 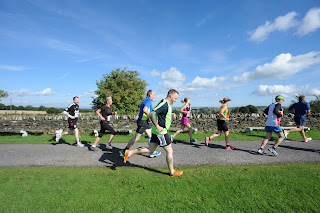 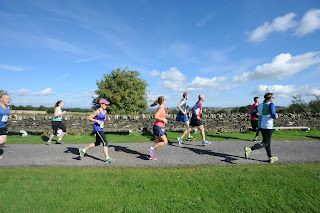 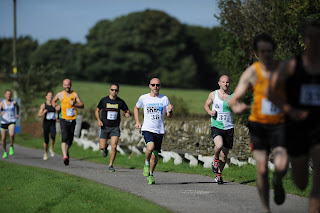 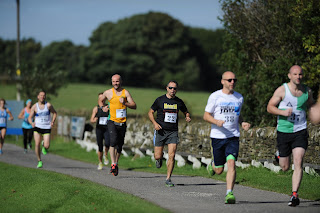 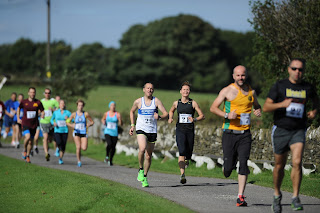 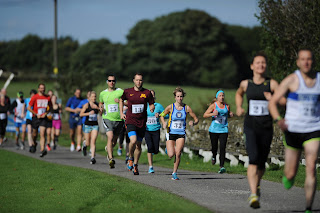 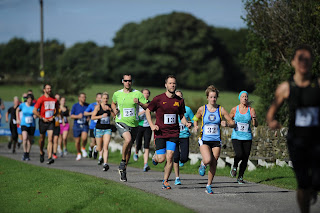 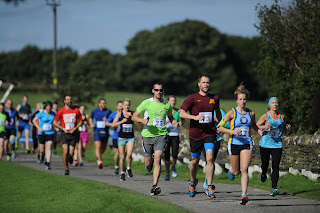 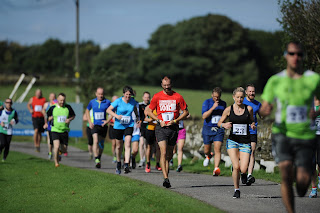 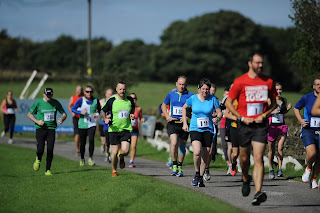 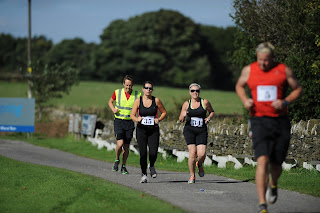 Whilst the race was happening the cricket club was organizing the fun run for the kids and they did a great job, the numbers were great too. They had about 40 juniors on the day, so many that they separated them into age categories which made it a lot more fun for the smaller ones as it gave them a chance to win a medal. There was 3 different age groups and it worked really well and the kids all got a sweetie goody bag at the end, I think sweets at the end would've been enough for all of them anyway, so the medals for the top 3 was a nice bonus. 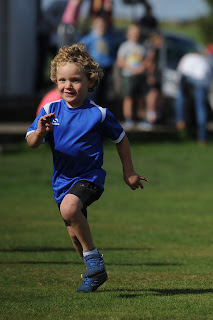 The family fun day was great again with BBQ, bouncy castle, stalls and music. With the sun shining everyone had a amazing time and the kids were running between stalls and activities making sure they got as many goes as possible. It was a great event for the Cricket Club but it could be better and hopefully next year with the race growing in popularity and it being added to the Stadium Runners club calendar it will bring extra people to the club. In all honesty the race could have been better too, as I think both Cricket Club and myself could have advertised the day a lot better and should have spread the word a lot more too. So considering we hadn't done the best we could the outcome we got was truly awesome and so encouraging.

I might have some other news about the Shepley 10k and my new race The Windmill 6 coming soon so keep reading and keep running everyone.
Posted by Unknown at 14:42 No comments: