First time Run Director and Huddersfield Half marathon what a weekend

After 9 months of parkrunning and trying to sprint to my 50th (not far off I'm on 41) I paused for a bit so I could make my debut as Huddersfield parkruns run director for the morning. I arrived a little nervous at 8am and was pleased to know I wasn't first to arrive but at the same time I didn't really know what I was doing or what I was supposed to do at this point. As more of the regular core team turned up the more my nerves eased and we were soon up and running and we were set up and awaiting the rest of our volunteers. As more and more people turned up I think I looked more and more lost which at least helped people to spot me. It didn't take long for all the volunteers and spots to be filled and it was then over to Louise for the first timers brief. Once this was done it was my turn to do the run brief at the start line.  Last Simon and Mark started doing the run brief from the top of the skate park so more people can hear them, so I did the same. It does put you on a kind of stage and everyone can see you, which for me was a little nerve wracking but I managed to give the run brief without too much trouble. Then they were off and for the first time I actually watched a start it was very weird not starting with them but fascinating at the same time.  As they came round after the first little lap, the runners were pretty much all still together so it was hard to pick out individuals and it was easier to give group cheers. These are all things you don't quite understand when it's the other way round, things seem a lot slower but this side the event flies by in a blink. It wasn't long before I had clapped every single runner across the line and it was on to result processing and the final bit of practise and learning for me before the test event for our Junior parkrun on the 11th. Next week it's Louise's turn at RD, Louise is a fellow Huddersfield Juniors parkrun run director like SJ and myself as well as our event director Simon Edwards, we are all very excited for our event starting soon. We all know what we are doing but until we get a couple of events done we won't be able to understand exactly what will be needed every week. 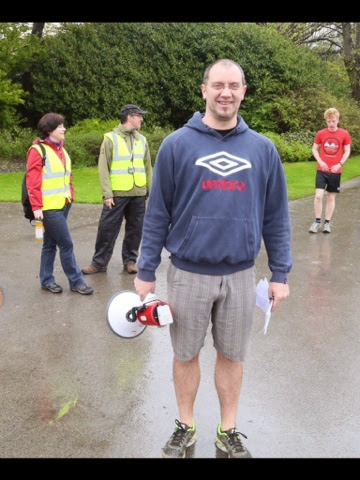 Well that was Saturday (parkrunday) of my awesome weekend and Sunday was more of an unknown than my first attempt at being a run director.

Sunday was the day of the Huddersfield Marathon and the first marathon in Huddersfield for more than 20 years. It was a 2 lap course which gave me the chance to take the half marathon option, and not only because I didn't fancy the full 26.2 but because the route looked very scary when I signed up. 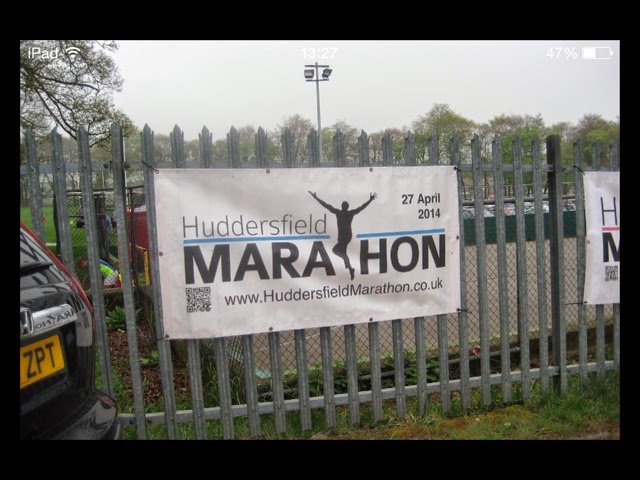 There was quite a few familiar faces also doing the half option and as we lined up at the start there was an excitement in the air mixed with a feeling of what have we done. We all knew this route was hilly but until we hit them we didn't quite understand what it would take out of our legs. After a run brief from Matthew Kelly (not the famous one!!!) we were set off and immediately we all ran the wrong way as the company who was closing the road wasn't ready and after 50 metres we all had to turn round, which to many of us was funny but the more serious runners were a little annoyed. It didn't take long for us to get back on track and getting into our running paces, and soon we were on our first down hill. After 1.5km we were heading down towards our first challenge but the views that we had were breath taking, and then at 2.5km we hit the bottom and from here for the next 2.5km there was only one way we were going. Uphill. This was a steady uphill too and it certainly warmed the legs up for the rest of the route, at the top of the hill there was a welcomed sight of some water from one the feed stations they had on course. After a brief flat section we were again on our way downhill and this was a fairly steep downhill making it hard to go too fast so your quads got a serious workout slowing you down. 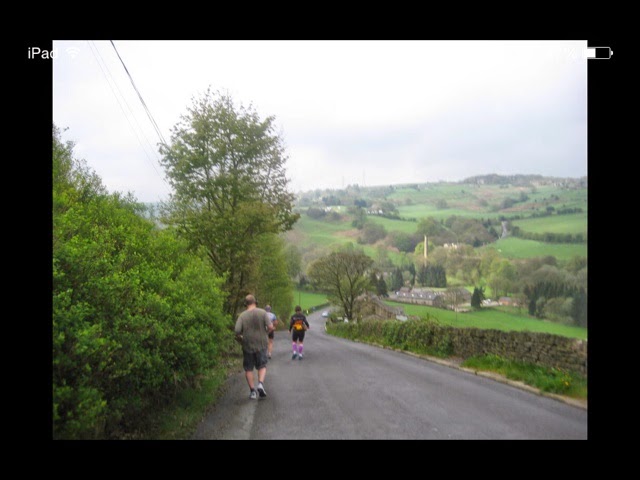 By the time you get used to the downhill you realise that at the bottom of the hill was the big one, the beast, the hill that was going to break the best of runners. I had already agreed with myself that I was going to give it a go but I wasn't going to push it as I had no idea what was ahead and still to come. 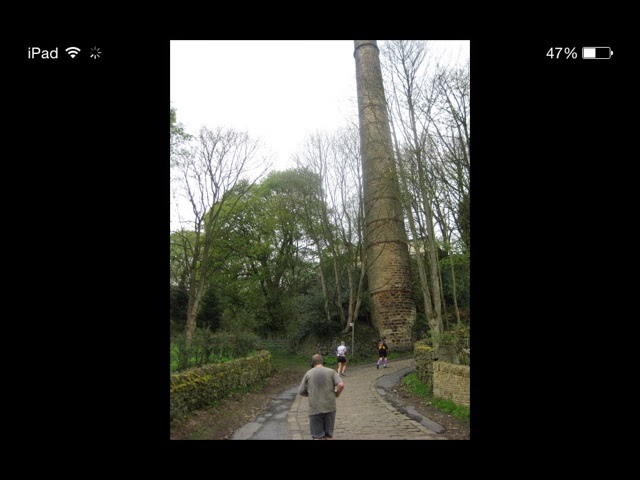 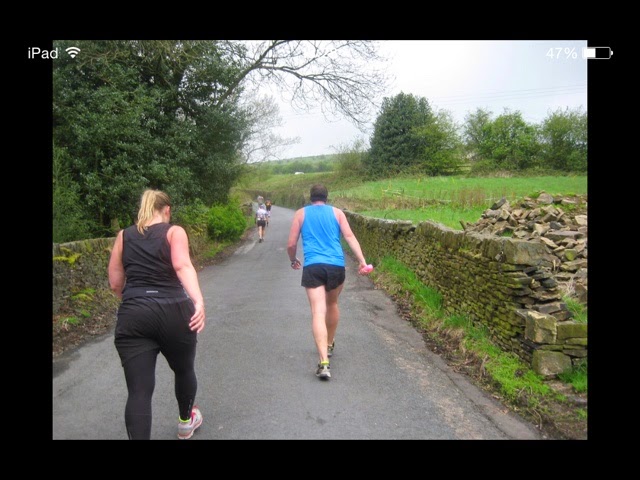 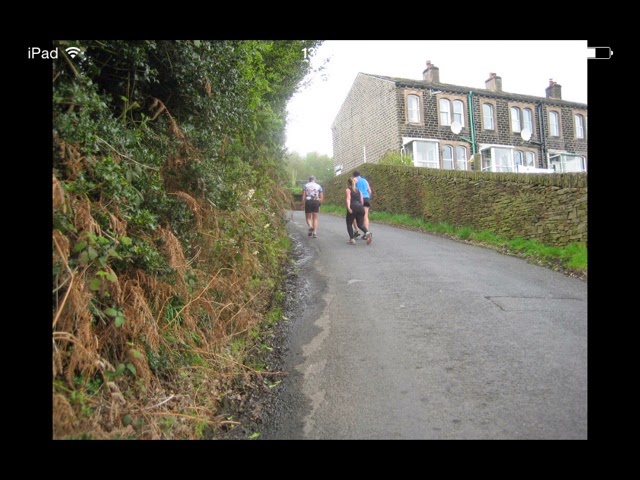 Route maps are good but they don't give you a true perspective on the elevations, so I was always going to walk a bit of this section as I have driven this road before and knew of its gradient. I managed about 300 metres before I first walked the hill but after a quick walk I ran a bit more, it didn't last long and I was walking yet again but I could see the top of the hill and was soon there, greeted by a sign saying nearly there! 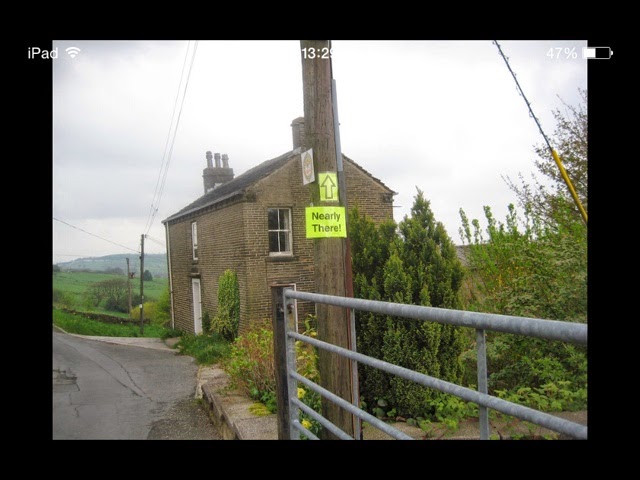 So yes there was more up hills to do but not so steep this time, and at 9km we finally reached the top and another water station and a familiar face cheering us on, which was nice. 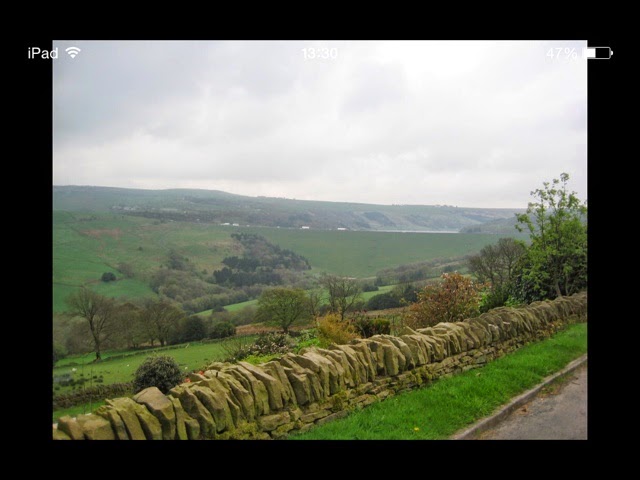 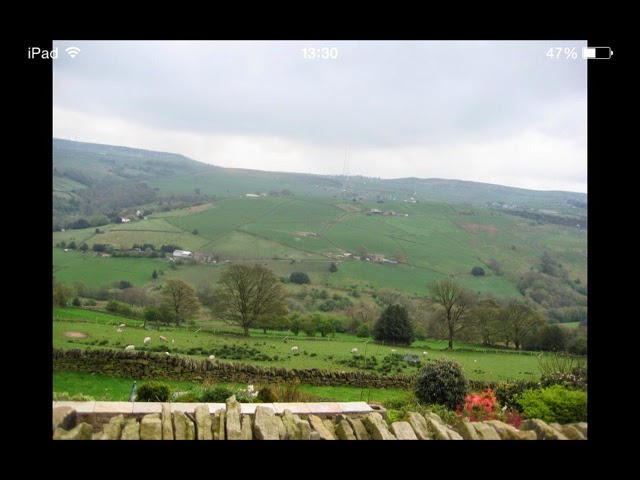 From this point on it was fairly flat in comparison until a short but steep hill down to a path which ran along side the M62 motorway. 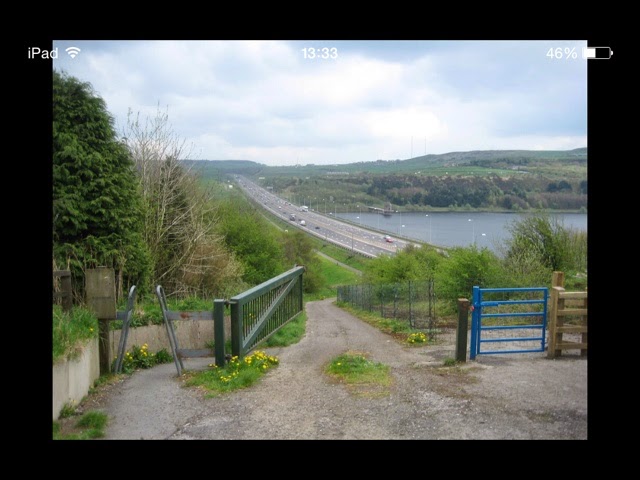 The noise from the motorway was increadable and as we were running about 6ft below it we couldn't see it but could hear everything which was slightly unnerving but you felt very naughty like you shouldn't be there and you were trespassing or something. 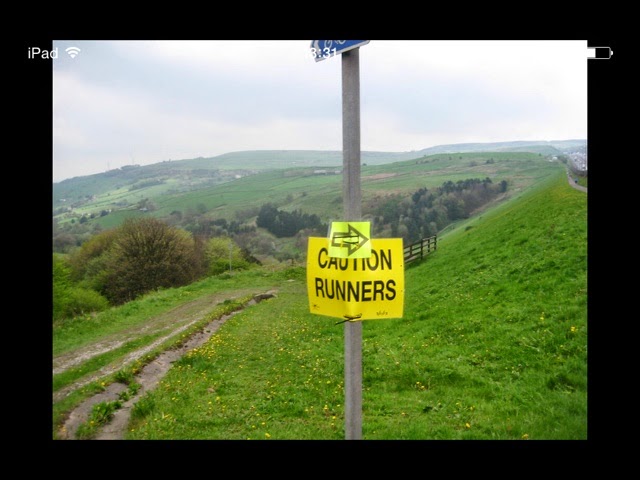 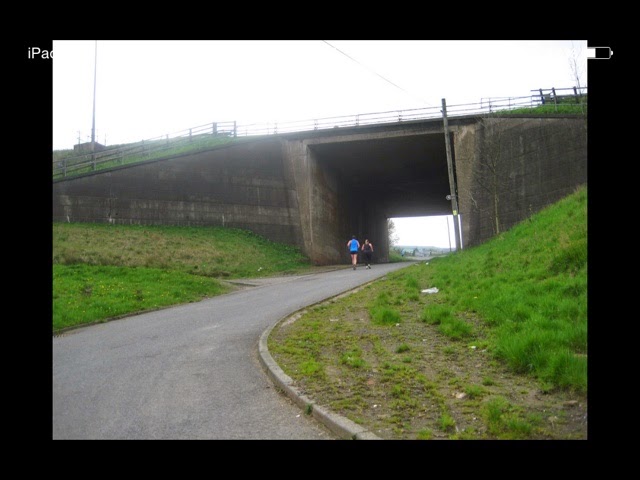 After nearly a Km we run underneath the M62 and start to climb again upto Pole Moor and about half way up I was walking again but not for long at least. There was a small crowd of people at the top cheering people as they get there, and that help me not to stop again, this was also the last hill for a while. This gave my legs time to recover and after about 500 metres I could start to up my pace again. 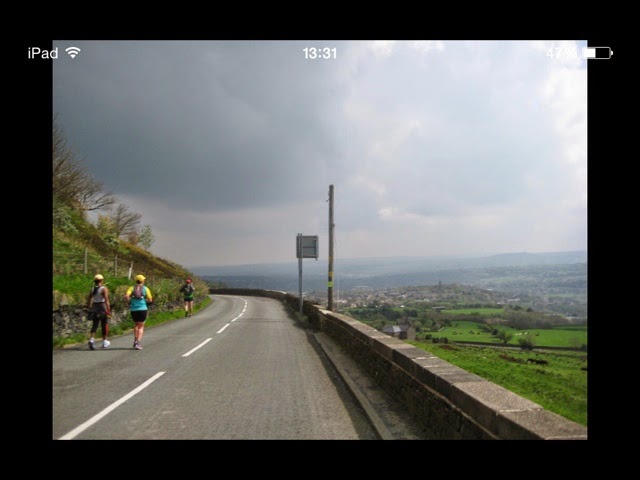 As we crossed the tops of the hills to drop down into Golcar I ran past Simon Edwards who gave me a great cheer and a high five which was an added boost to my run with only 4 miles to go. It wasn't long before we were heading downhill for the last time but a long quad burning downhill, but to help there was lots of friendly people cheering us on and even the odd head out of a house window cheer. As you reach the bottom again you're greeted by another uphill, a short but fairly steep hill with a sharp corner at the top all done very slowly as my legs are still in shock from the long downhill. The next Km is a gradual up hill followed by the start of a final steep hill back up towards the main road and the final 300 metres to the finish line. 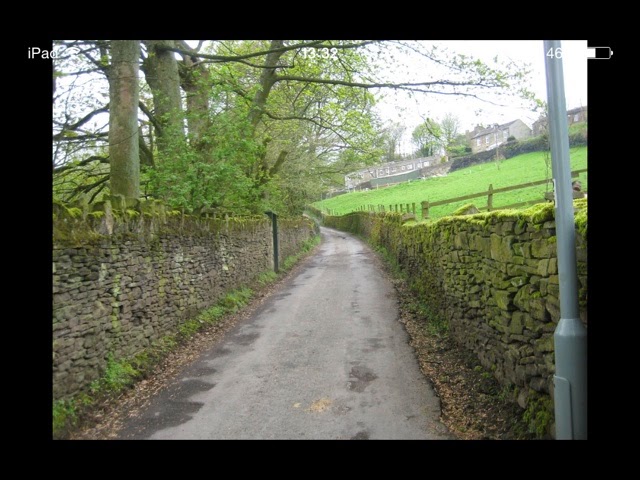 It is at this point you give respect to the runners who are doing the marathon and have to do another lap of the beautiful but devilish hills of Huddersfield. At the drive to the YMCA where we started from was a group of people cheering both the finishers and the runners starting their second lap. They had Simon Brass from parkrun at the entrance to the drive directing runners with the same gusto he shows at parkrun and having a friendly face when your legs are dying is great to help to get you over the line. 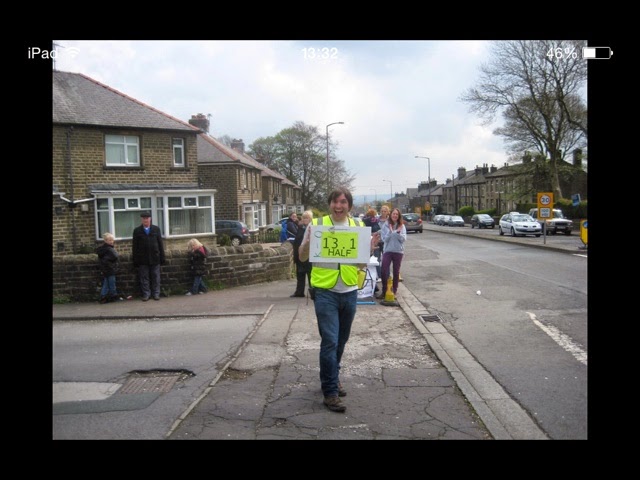 With the finish line in sight a great feeling of accomplishment over whelms you and the marshals at the finish line knowing your name and cheering you across the line is awesome. Plus hearing you have finished the tough half marathon almost bang on target is brilliant, I had set myself a target of 2 hours and I completed it in 2hr01min. Amazing is all I could say for the next couple of seconds whilst I came to terms with the fact I had completed my first half marathon and In a great time too. SJ and the boys where there to greet me which was lovely and Dexters little proud face was awesome, and topped off an amazing morning. 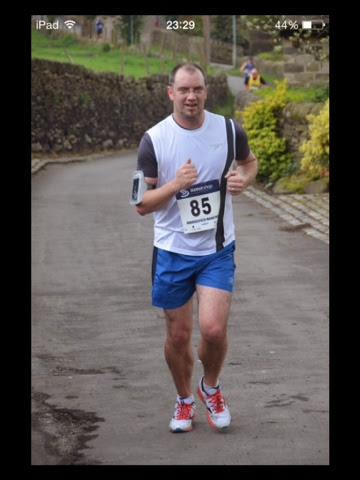 There was lots of social media talk about the Huddersfield Marathon being the toughest in the UK, but even with nothing to compare it to I can easily see how it can be called the toughest. I couldn't recomend it enough though to anyone who is up to the challenge, it's definiatly 1 to cross off the list. Depending on what my next year of running holds will determine which option I decide to do next year, but I'm going to do one of them for sure.

Thanks for reading and Keep running everyone