OH NO HUDDERSFIELD PARKRUN WAS CANCELLED WHAT ARE WE GOING TO DO????
Tourism that's what!!!!
There were discussions during the week as to which parkrun we're going to visit or should I say descend on, there was talk of Barnsley but that was very quickly stopped because of the hillyness. Concord was mentioned because Dexter thought it meant we flew round on Concorde, Sheffield Hallam was having a birthday party but we end up deciding on Cheadle Hulme parkrun as it was fairly new and it had a cafe right at the finish. So we organised our car arrangements and meeting points and times and waited for parkrunday to arrive.
SJ and I had arranged for Flynn and Clark to stay at my mums the night before so we didn't have to make a detour via my mum's house at silly o'clock in the morning to drop them off. We now could get up at a reasonable time and drive over the tops to Manchester and Stockport and on to Cheadle Hulme.
On arriving at Cheadle Hulme we all met up and had a pre parkrun chat and wished Tony Pinnington a Happy Birthday, then we all gathered for a pre run photo. There were 27 of us that had made the trip over but only 26 of us that made it in time for the photo as Mr Simon Brass Bunny had been delayed by a tyre blow out on the motorway. We rang him to see what was going on and whether he would make it for the Start and he said he would just start late if he was late. 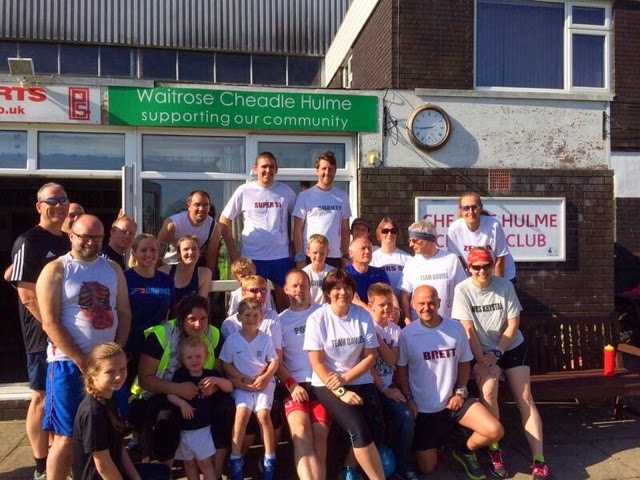 After a great run brief where we were introduced to everyone and we were part huge number of first timers to Cheadle Hulme parkrun, 3/4 of the field were first timers. We then moseyed round the cricket pitch to the start line where we all sorted our watches, apps, etc. for the start. Then we all took part in a start line selfie for ED Sam and a last minute stretch ready for the RD Paul to set us off. 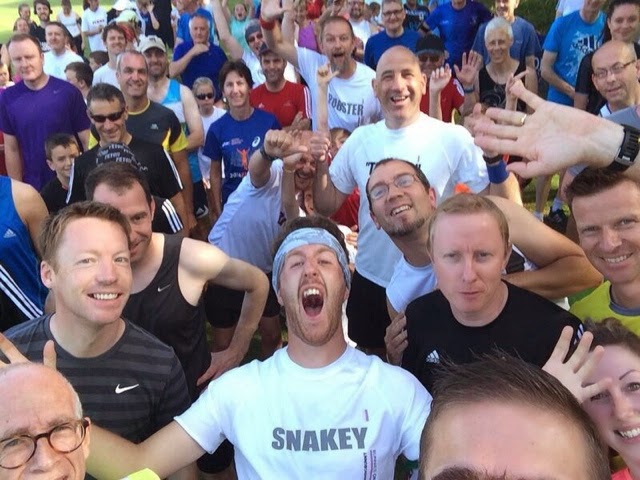 Just as he was about to let us go we could see what can only be described as Japanesse movie style giant man/bunny charging across the pitch and bunny ears flapping in the wind. It was Mr Simon Brass Bunny fresh from his tyre changing adventure, bounding across the pitch and even the cricket wicket nothing was getting in the way of him starting at the same time as the rest of us. He had to be reminded to take his rucksack off his back he was that focused on being on time, just. 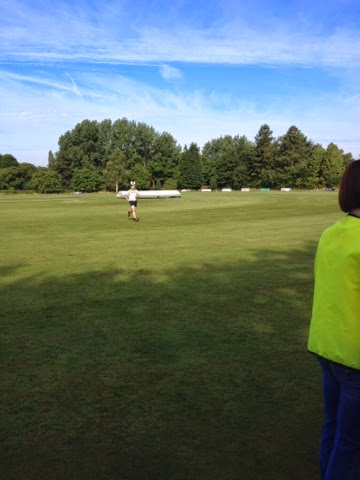 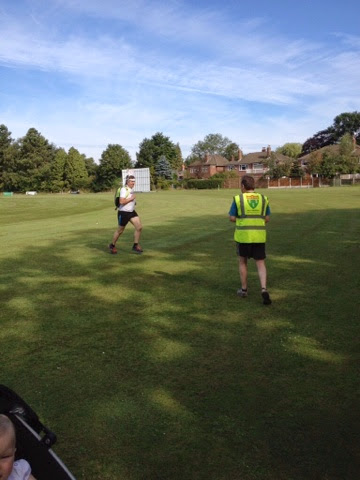 Finally we could start Cheadle Hulme event number 3 and in scorchio sunshine, the weather fairies were being extra awesome this morning.
We were off and running round the cricket pitch for the first time before we were ushered through a gate to the rugby pitches where we navigated the outskirts of 3 rugby pitches and back towards the club house and the cricket pitch and the end of lap 1 of 3. The course was laid out really well by ropes all the way round the rugby pitches and markers round the cricket pitch. I even considered counting them on the 3 lap just to take my mind off the heat and my burning lungs, because I was going at a fab pace and from my split time I was on for a good time. I was finding the flat course really good and even when some people were finding the couple of patches of sand hard I was just flying. I was helped a lot by the really nice voluncheerers at the small bridge connecting the rugby pitches. There was a group of about 6 of them, some lovely little girls with rattles and bells cheering you on and a few adults guiding you in the right direction round the pitches. It was an awesome section of the run and almost a little reminiscent of the Tour de France where the spectators cheer on the riders with large cow bells and lots of cheers. It definitely helped everyone round even Dexter, he ran his first parkrun where he didn't stop for a walk or rest, he didn't want to look silly in front of the little girls at the bridge he told us afterwards. He's so cute sometimes. 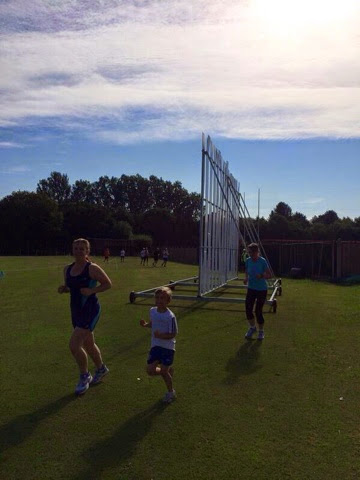 On finishing the 3 laps in the searing heat the welcoming sight of the clubhouse and some shade was great and getting our barcode and tokens scanned just in the doorway was brilliant. It was easier to then go back outside to cheer everyone else across the line and then join SJ and Dexter on their final lap.
With Cheadle Hulme being a smaller parkrun it had a very relaxed and friendly where you felt like you could go round and talk to all the runners and see how their runs went. Something that is difficult to do at Huddersfield and it's 600+ runners. Plus with a smaller crowd it meant that the queues for the post parkrun bacon butties etc. were smaller and you could fill your face with food quicker. We all sat outside in the glorious sunshine to have our post parkrun chats and chin wags and shared stories and played games with the smaller parkrunners that came along. We talked with the event team and shared thoughts and stories from our bunny adventures before we all had to make the trip back over the Pennines home again.
We had an awesome time at Cheadle Hulme parkrun and we will visit again I'm sure probably in the winter months when it could be a muddy affair. Great team, great volunteers I'd highly recommend it.
It wasn't until I was browsing the results after returning home that I noticed that Cheadle Hulme was graced by a soon to be the parkrun show legend Paul (chauffeur) Freyne. Who is so close to making it 200 different events and all within 250 parkruns. I wonder where his 200th event will be and where his 250th run will be, will he go run with his homies for the 250 at bushy. It would have been nice to have met him but I'm sure our paths will cross again soon.
Posted by Unknown at 14:52 No comments: