The 100 days of running challenge is now complete and even now after all those runs I'm unsurprisingly missing going out for a run today. Unsurprisingly? Yep! 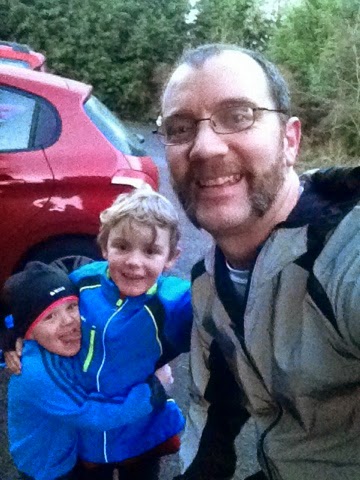 The 100 day challenge started out just as it says a challenge but within 2/3 weeks it already becomes more of a routine. Doing it through the winter months probably helps to keep it more of a challenge, plus when the snow and hail come at you with force you have to be mentally ready for it. 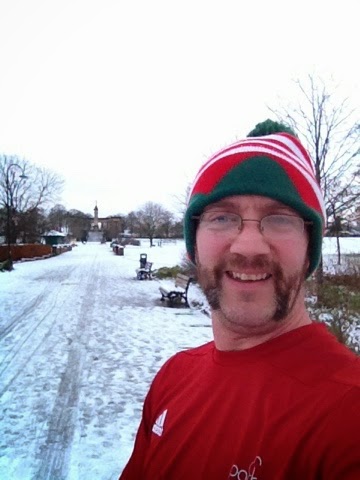 So don't try to stick to a set goal when it does, be flexible and have a reasonable minimum distance for a run. If I can pass on a bit of advice to anyone thinking of doing the 100 day challenge or any run streak, it would be variaty mixed with a few regular runs or distances. I did this by having a regular Monday and Saturday but then the rest of the week I mixed my distances, routes, times and pace. Well I say pace but most of the time I just went for it, I really enjoy running and if the conditions were right I would just go for it. Having said that I really would suggest varying your pace even if it's just slightly.

My regular runs or days consisted of a Monday run down at Stadium runners, a running club I joined a couple of months before my challenge started. Then on the Saturday, I would as I have done for nearly 2 years now, taken part at my local parkrun, Huddersfield parkrun. 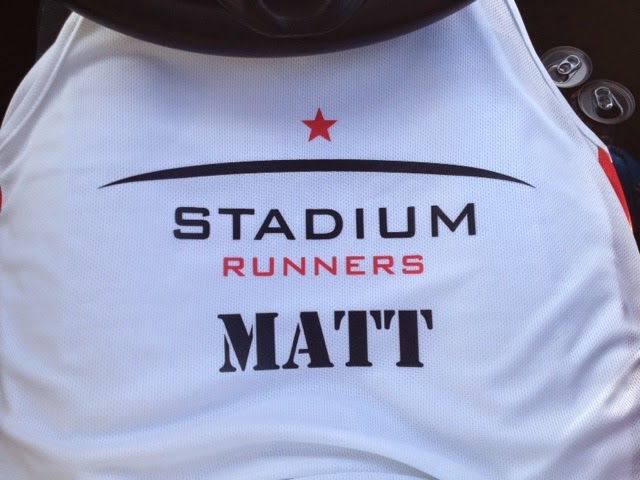 Stadium runners has been such an important part of the challenge, the runs would always be about the same distance each week but the routes would change. Mixing up the routes keeps your runs a bit more interesting, there nothing more monotonous than doing the same route day after day. Plus the people I have met and run with at the club have been so friendly, helpful, encouraging and inspiring. It has been a pleasure getting to know them over the past 5 months and they've helped push me and improve my running tremendously. I've beaten PB's and increased the distances I can run all whilst running with friendly runners either training for runs or just striving to stay fit and healthy.

My other regular run is parkrun, which I can't advocate enough, it truly is the one thing that has had the biggest impact on my running. There are 2 sides to parkrun the running side where you can test yourself week in week out trying to improve your time. Then there is the social side where you can meet other runners, swap stories and talk about other runs/races they've entered. It's always good to have races as targets to train for as it gives you motivation and something to look forward to. 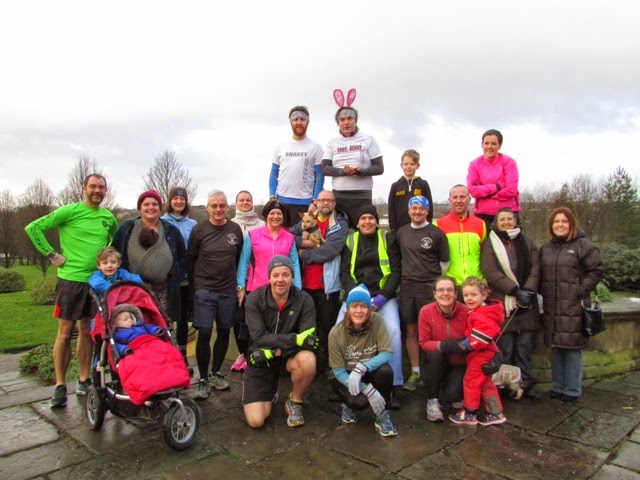 Throughout the challenge I had a goal race that I had planned to enter, which was the Huddersfield half marathon. I had done it last year and my plan was to go back this year to try and beat my 2hr PB. I had also entered a few races that were during my challenge, these were good for tracking or testing my progress through the 100 days. parkrun is also a good event to track your fitness, I have beaten my parkrun PB about 4 times since day 1 and I feel like I have more in me too. Other PBs came and went as Stadium runners held a couple of 10k time trials and I even got a PB at the Brass Monkey half marathon over in York. 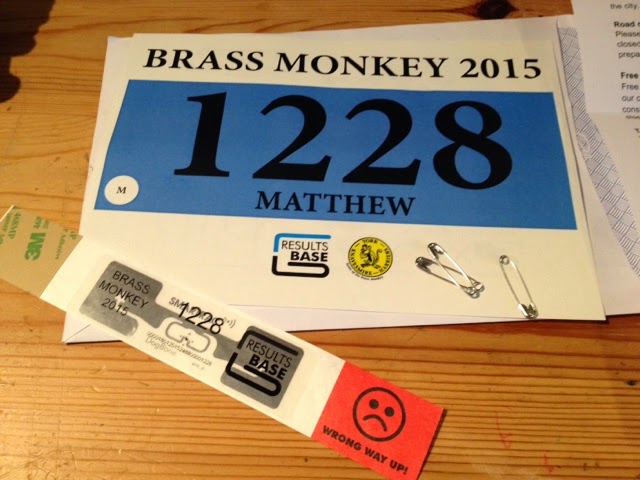 Here are my PB stats from my runs over the last 100 days.

And those are just the official ones, I have manage to improve my times and increase my fitness over lots of distances, I was really surprised at how my legs kept responding as I kept pushing.

The past 3 weeks down at Stadium runners I have done the No Pain No Gain (NPNG) track session. With it being flat and on an athletics track I was able to push myself even further and have even managed an unofficial 5k PB 3 weeks running. A 19m24s, then a 18m43s and just this week on day 99 an amazing 17m56s which even though its unofficial it give you an amazing confidence boost. 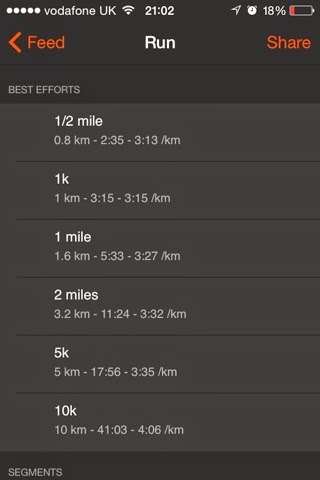 So all that led me to day 100 and I was determined to finish it off with a bang, so I prepared a route and just went for it. So this is where my first ever marathon began, yep I wanted to go all out and push myself that little bit further. The furthest I'd run prior to this was 16 miles, so this was a huge jump in distance. The main worry I had was managing my pace, I knew I had to slow down to maintain my legs but would I be able to do it?
I set off from my mums house in Marsh as she was looking after Flynn and Clark whilst I tackled this final hurdle. The plan was to do a circuit of Huddersfield round to our house in Shepley then continuing round to be back at my mums ready to pick up the boys and then head back to pick up Dexter from School. So unlike a normal marathon I had a 4hr time limit otherwise there would be no one to pick up Dexter, motivation if ever I needed it. So off I went up through Marsh and Birchencliffe to Ainley top where I would run over the top and drop down through Fixby and Bradley completing the first 10k. It was now when the hills started with a big climb up to Kirkheaton and then down again to Waterloo. I was still feeling good and my pace was great, a little faster than I wanted to but I felt comfortable. From Waterloo I would then take the long drag of a hill up past Lepton towards Grange moor which seemed to go on forever, but on the plus side I gained a KOM Strava segment for my efforts. At the top of the final hill I turned off and headed for the Emley moor mast, but not before stopping to take a photo or 2 of the views. 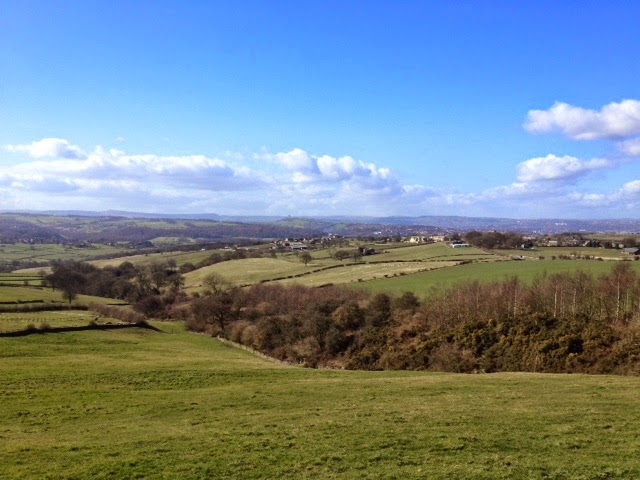 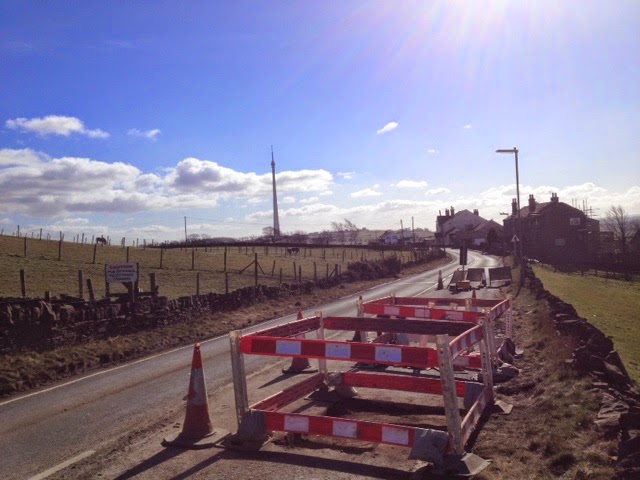 This was the worst thing I could have done, as my phone which I was using Strava on decide to crash. So after a couple of failed attempts to turn my phone back on I carried on hoping it might work in a bit. About a mile later down the road it decided to wake up which was a relief as  I wouldn't like to carry on blind so to speak. Once I was at the mast the downhills returned and with that the sight of home and a long awaited drink. Silly I know not to have had a drink upto now but I kept telling myself it was that far to my house. I was just past the 3 acres pub when I had a loss of motivation and questioned myself, whether I was actually going to be able to do this. I started to walk for a bit just to catch my breath and find my mojo again, which soon returned and I powered through until I reach Shelley and my mates house. I stopped to knock on his door for a drink of water a little chat as you do, then I was on my way to my house feeling refreshed and on it again. As I reached home I popped in to get another drink, a few haribos and my Garmin. I had to stop my phone and switch to my Garmin as I had about 20% battery left and it wouldn't last the last 10 miles.
Setting off again I felt good climbing Marsh lane out of Shepley heading for New Mill, I was slower but it was to be expected and I was still within my time limit. Passing through New Mill and Brockholes was a breeze but as I hit Honley I stopped for a drink from the garage and this I where my struggles started. With only 5 miles to go it was a mixture of mentally pushing myself and ignoring the small pains in my leg muscles and hips. I got to Lockwood before I needed another little walk but I was soon going again and with the finish just a few corners away I motivated myself for the last couple of miles. I reached the bottom of Paddock and Gledholt bank and the cramp in my calves was starting to win and I walked up the final hill until I reach the bottom of my mums road. I gave it one last push but then cramp in my quad cut me short by a couple of hundred metres. Walking the rest of the way I could regain my breath and my senses. So when I reached my mums house again I could revel in what I had just accomplished, what I had just push myself to do. There was no doubt I was knackered but I was pleasantly surprised at how unscathed I was. I couldn't quite musta it but I was smiling ear to ear on the inside, I had completed my first ever marathon in a time of 3h42m. I didn't have long to recover as I had to then go pick up Dexter from School still dressed in my sweaty running clothes, but like I said I was smiling ear to ear on the inside so I didn't care one bit.
That was it I had completed 100 days  of running and finished it with a marathon, how cool is that? I'm now taking a well earned rest or at least for a couple of days whilst the stiff legs recover but I'll be out there again soon. It has been such a cool past few months and I can't thank everyone that's helped me enough, be it running with me, helping with looking after the boys whilst I run or just giving me encouragement along the way. 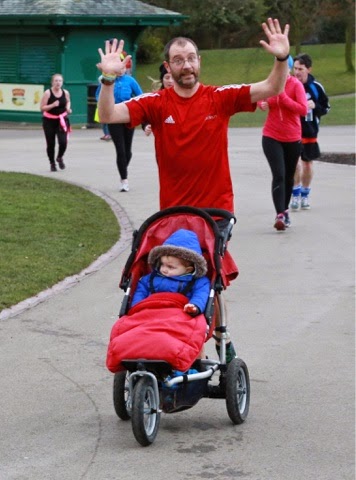 Let's just hope I can keep this level of fitness up and smash some more PB's especially my Huddersfield half marathon PB in April.
Keep running everyone.
Posted by Unknown at 05:24 1 comment: