I haven't written a blog for a while and I thought that my run report of the Shepley 10k would be my latest but something happen during the week that has completely thrown everyone out of sync. So this is my tribute to an amazing lady who gave her heart and time to everyone at Huddersfield parkrun and the running community, this is Olives parkrun. 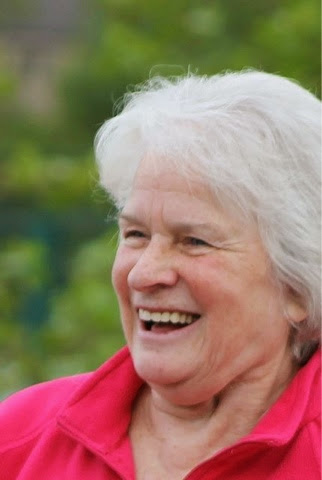 The news broke during the week that Olive Brearey had passed away after a battle with Cancer and from that point on the tributes began to pour in. Big, small, long, short or just a simple thank you Olive, each and every message was a testament to how much of an impact just one person can have on a community when they give up a small amount of time to support and cheer people on. There were tributes from close friends that were heartfelt, and also messages of thanks from people who only knew her as the lady on the second to last corner cheering 'keep going, keep going'. It didn't seem to matter who the messages were from or how well they knew Olive, they all had had something in common and that was how much those few words she spoke each week helped them and stuck with them. I never had the pleasure of speaking to Olive properly but every time I passed her she always gave me or my son and I, if I was running with him, great encouragement which always helped you and picked you up for the final sprint to the finish.
So on parkrunday when Simon Brass approach the skate park to address the gathering parkrun crowd as he usually would, there was a look on everyone's face of 'urgggmmm this is going to be emotionally hard'. You could see how hard it already was on Simon just from his walk up the skateboard ramp, and then he reach the top and said his hello and welcome to Huddersfield parkrun as usual. It was at this point that Simon did something that made the nearly 600 runners stood at the start line completely quiet and got their complete attention. He reach up and took off his Bunny ears.......which if you know Simon you know that those bunny ears are a part of him on parkrun weekend without fail. It was that one gesture and offer of respect which silenced nearly 600 runners. On a normal parkrunday there are still a few people that talk over the run brief as it difficult to hold everyone's attention but today everyone knew what he was about to do. It wasn't about who you were today, or which part of town you came from, how many runs you've done, no we were all here to remember a truly amazing lady and pay tribute to everything she has done for parkrun, for running in the community and for all the people that she had help or encouraged. I don't think she will have realised how many people she had touched, but I hope she does now. Simon kept it together long enough to give his own brilliant tribute, we all gave a moment of applause, and he asked people to join him and the volunteers after we had finished our runs on Olives corner to clap and cheer the remaining runners through to the finish. He then he set us going on our parkruns with Olive in our thoughts.
As people were running I could see they were all very determine to do well for Olive just as she would have wanted us to. This was always going to be an emotional parkrun but the feelings and thought you got when reaching Olives corner for the first time was a little surprising and overwhelming, Olives sign was placed on the corner and there was a gathering of flowers left by people before the run. Everyone who ran by paid their own tribute or respects to Olive if it was a clap, a touch of the sign or a 'Thank you Olive'. 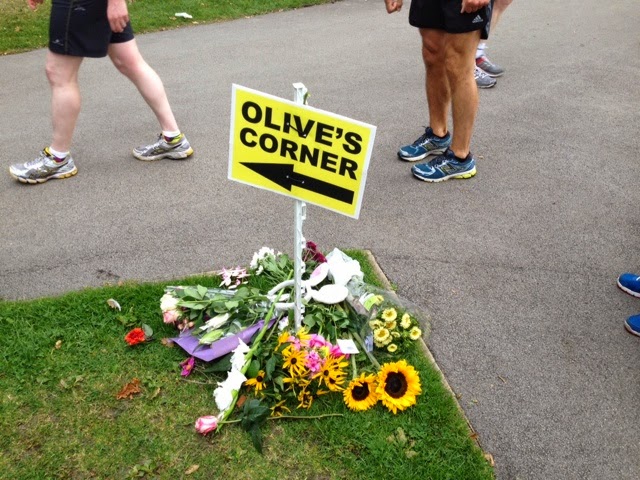 By the time I was approaching Olives corner for the second and final time there were a few runners starting to line the corner with Simon and the cheers and claps I got really pushed me to finish hard and on a sprint. So after I had my barcode scanned I went and joined the at this point 20 people on Olives corner clapping and cheering. It was very emotional and as more and more runners finished and joined us the more intense it got, but it also got louder and at its peak you could apparently hear us from the bottom of the park. I think no one went round that corner today and didn't give their all, because of all the support that was given and no one wanted to let Olive down. As the tail runner came round for the final time there was at least 300 people lining the corner clapping, and as the clapping disapated there was a few tears and lots of emotional hugs and handshakes, never has 'our parkrun family' been so apt.
There is talk of raising money for a plaque in rememberence of Olive and after today I think they will have no problem in raising the funds. There is also a group of people that are going to the Barnsley 10k and running together in rememberence of Olive, as she loved the Barnsley 10k and had optimistically entered it this year.  I'm sure Olive will be remembered for many years to come and with the possible plaque maybe for generations to come too.
So as a final word I will just say Keep going, Keep going
RIP Olive
Posted by Unknown at 06:49 2 comments: